Two Capacitors Are Better Than One

I was looking for a good reference for some ADC-driving circuits, and ran across this diagram in Walt Jung’s Op-Amp Applications Handbook: 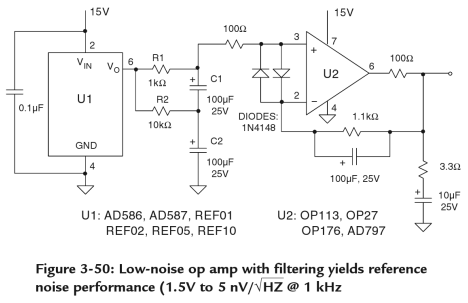 And I smiled to myself, because I immediately remembered a circuit I hadn’t used for years. Years! But it’s something you should file away in your bag of tricks.

Take a look at the RC-RC circuit formed by R1, R2, C1, and C2. It’s basically a stacked RC low-pass filter. The question is, why are there two capacitors?

I discovered this type of approach myself a few months after I graduated from college and was working on some battery testing circuits. We needed a really slow RC filter, with a 10 second time constant. Really simple, right? 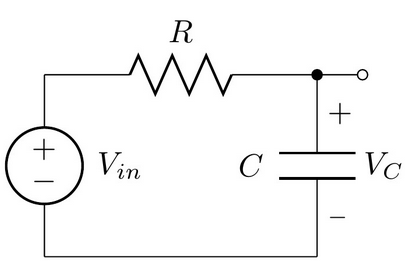 I picked R = 10MΩ and C = 1μF, and followed the RC circuit with a good CMOS-input opamp follower with guaranteed maximum input bias current in the picoampere range.

There’s a problem here, though. 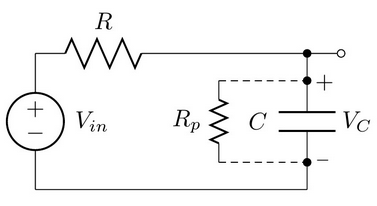 That spec is worst-case; I don’t remember what I ran into when I was working on the battery tester project, it might have been maybe 10 or 20 millivolts sag due to leakage through the capacitor’s insulation resistance. A 5GΩ insulation resistance would have had a gain of 0.998, with a sag of 24mV on a 12V battery. (And with high-impedance nodes, you’ve also got to be careful about keeping your circuit board clean so there’s not a leakage path on the board through moisture or leftover solder flux.)

And there’s really nothing you can do about it if you use this circuit topology, unless you’re willing to pay for ultra-low-leakage capacitors. You might think, hey, I can just raise the resistance and lower the capacitance by a factor of 5 or 10, but then the parasitic resistance will scale also, and in the end things won’t really change.

But one solution to this is to use a second RC filter: 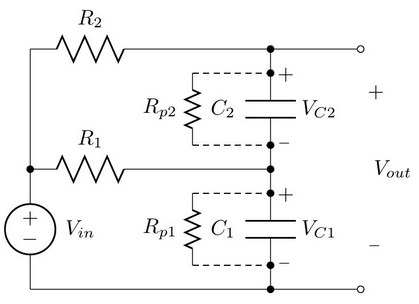 Now our output DC voltage for a 12V input is 11.995V, worst-case. (Typical insulation resistance will be higher so our gain is most likely going to be much closer to 1.)

As far as the AC characteristics, we can basically neglect Rp, and if I’ve done my algebra right, the transfer function from Vin to Vout is

What this means is that the highest frequency pole has a time constant that is only 0.38197 as much as our single-pole RC filter. The other pole and zero come into play at frequency about 7 times higher, and they’re close enough together that they don’t do much.

So if we want the same effective time constant of 10 seconds, we need capacitor values that are 2.6x higher.

For a 12V battery this would mean we’re sensing 11.97V at the output. Sigh. A 30mV sag. We could stack a third stage, which would help the DC gain but make the frequency response worse, driving us to higher capacitor values to get an equivalent time constant. I’d probably stop at two stages and just live with the 0.9975V worst-case DC gain, which is at least much better than the 0.98 worst-case DC gain of the one-stage RC filter with leakage. And anyway, that’s worst-case; the insulation resistance of capacitors is usually higher.

But you get the idea. Two capacitors are better than one, when it comes to stopping leakage current.

The same approach works for high-pass filters. Just switch the R’s and C’s around:

This time the capacitors are supposed to get rid of DC voltage. Most of it is gone when we look across resistor R1, and we add a second stage to get rid of most of the rest.

The other point to make is that it’s really hard to use analog circuitry for very long time constants (more than a few seconds). The circuits become very prone to parasitic leakage. Much better to do this kind of long time-scale low-pass filtering with digital signal processing, if you have a microcontroller around anyway. Then all you have to do in analog is enough filtering for anti-aliasing, and it’s a tradeoff between how fast you want to sample and run your computations in the digital domain, and how large the components are in the analog domain.

Capacitors have leakage current through their insulation. It’s usually specified in terms of a minimum time constant (Ω⋅F). This forms a DC voltage divider, forming an error voltage on a low-pass or high-pass filter.

In any case, keep this idea in your bag of tricks.

Same principle works with MOSFETs in the subthreshold region. Put two of em in series to reduce leakage by ~ 50X; if that ain't enough, put three in series. As I suggest to you on reddit, Jan 24 2015.
[ - ]
Comment by leredditor●February 15, 2015

I like your articles. Though many of them go over my head. I have a question related to this article if I may.

If I remember correctly, capacitors have a higher leakage at higher temperature. Not sure about the capacitance; from looking at the definitions of the standard temperature designations (NP0, X7R, Y5V, etc) https://en.wikipedia.org/wiki/Ceramic_capacitor#Temperature_dependence_of_capacitance it looks like capacitance can either go up or down.

Lifetime definitely is reduced at elevated temperatures; Arrhenius's Law comes into play and the lifetime drops by about a factor of two for every 10 degree C rise.
[ - ]
Comment by jms_nh●March 15, 2016