You’d think it wouldn’t be too hard to measure electrical resistance accurately. And it’s really not, at least according to wikiHow.com: you just follow these easy steps:

Somewhere in there, I guess you’re supposed to read the multimeter, but it doesn’t say.

Anyway, for resistances in the 100Ω - 1MΩ range it’s pretty easy. You find a good digital multimeter (DMM), connect probes between it and the two terminals of the resistance in question, and see what the DMM says. Outside this range we have to watch out for parasitic circuit elements causing errors.

Above 1MΩ, things can get a little tricky. If you want better than 1% accuracy for a 1MΩ resistor, that means you need to prevent parasitic parallel resistances from being any lower than 100MΩ. Making high-impedance measurements isn’t an area I’m very familiar with, so I can’t comment on the techniques used. (Except for guard rings, which I never seem to get a chance to use in a design. Oh well.)

Low-impedance measurements, on the other hand, are a source of constant frustration. I deal with resistances under 100Ω all the time. Motor resistances tend to be in the 10mΩ - 10Ω range. At the lower end of this range, even microohms of parasitic series resistance can cause measurement errors.

What is an ohm, anyway? Yeah, we all know it’s an electrical resistance which causes 1 ampere of current to flow when 1 volt is applied across its terminals. But let’s get a sense of how big or small an ohm is.

Perhaps these give you an idea about resistances of conductors that you usually take for granted.

The solution is to use a 4-wire or Kelvin sensing measurement. Some benchtop multimeters have a mode to do this, with four plugs on the front panel, but they tend to be on the expensive side, and it’s just as easy to make a good 4-terminal measurement with a power supply that you can operate in current-limiting mode and a pair of multimeters, one measuring current and one measuring voltage: 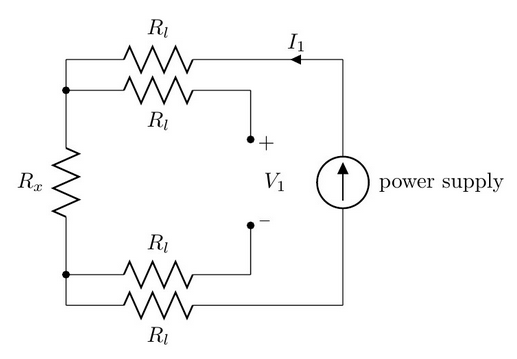 Rx is the unknown resistance, and Rl is the lead resistance. You set the power supply to some current I1 (something convenient like 1.0A or 5.0A), connect it to Rx through a DMM measuring I1, and measure the voltage across Rx with another DMM measuring V1. Then calculate \( R_x = \frac{V_1}{I_1} \).

Well, it’s mostly that easy. You still need to be a little careful:

The four-wire technique is called Kelvin sensing after William Thomson, Lord Kelvin, who invented (among many other achievements) the Kelvin bridge in 1861 as a 4-wire version of the Wheatstone bridge, back in the days before we had accurate analog-to-digital converters. Like balance scales for comparing weights, the idea was that the way to measure resistance was to show equivalence between an unknown resistance and known resistances. Kelvin sensing involves a pair of force/sense connections (or Kelvin connections): the current-carrying path is the “force” connection, and the voltage-measuring path is the “sense” connection.

That’s pretty simple, so you just use a pair of Kelvin connections at the end of a bar of material, right? Well, not quite. The problem with using Kelvin connections to measure conductivity, is that you’d have to use flat plate electrodes at the ends of the material, in order to enforce uniform current density in the material. And it’s a lot easier to use point electrodes. (In fact, if you’re doing fluid conductivity measurements, you can’t use large plate electrodes because they would block the flow of fluid.) So the usual convention is to have a 4-point probe, with all four contacts separated:

The conductivity of the material can be calculated as

Material conductivity measurements are kind of a pain, and I’d rather stick with measuring the resistance of a known component.

There’s another reason to use four-wire measurements. Embedded circuit design is usually voltage-centric: most ADCs measure voltages. If you want to measure currents, you have to route them through a sense resistor and measure the voltage across it. And while finding accurate sense resistors is fairly easy (I’ve already mentioned them as item #9 in an earlier article), you have to be careful with the layout. Here’s an example of a good layout for a current sense resistor: 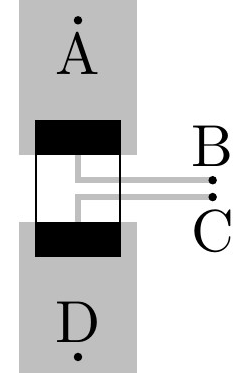 The wide traces carry current (with an SMT sense resistor spanning the gap). The narrow traces connect directly to the inside edges of the sense resistor’s pads, so that you are measuring the voltages directly across the current sense element. Connect these to a differential amplifier and you’ve got an amplified voltage relative to whatever reference you need. Fairly straightforward, right?

Well, there’s one fly in the ointment.

Remember all those examples I gave at the beginning? They were all examples of the resistance of conductors, which we usually assume is zero, for the sake of convenience. We’re not the only ones to take this resistance for granted. Computer-aided design tools do as well. When you design a circuit in OrCAD or DxDesigner or Altium, the assumption is that you have a series of components connected by ideal conductors. All the component pins that connect to circuit node N14563 are at the same potential.

Except they’re really not, because when current flows along a PCB trace, there is a small but nonzero voltage drop across the trace. And the computer-aided design tools are still in denial about this; or at least, they don’t make it easy.

Quick quiz: how many terminals does the sense resistor (shown above) have? The way you approach circuit layout dictates the answer.

The geometric approach would say that there are two terminals. It’s easy to tell: just count the pads! There are two of them, one below point A and one above point D. Points A and B are the same circuit node (let’s call it SR_PLUS), and points C and D are the same circuit node (let’s call it SR_MINUS). If you want to use a Kelvin connection, you have to diligently make sure the other components on this circuit node are routed properly. Maybe they join the SR_PLUS net at point A. Maybe they join the SR_PLUS net at point B. This information is not included in the schematic, so if you’re the circuit designer and you’re working with your resident PCB layout guy, you have to tell him which traces connect where. Because he doesn’t know all the subtleties of your circuit. And if you’re not careful, he may join the current sense amplifier input to point A, and the MOSFET gate drive chip to point B. Layouts are a multilayer mess that can be difficult to review, so you may not catch all the errors.

The nodal approach would say that there are four terminals. It’s also easy to tell: how many distinct voltages are there? The voltages at point A and B can be different, so they have to be part of different circuit nodes. The same with C and D. So the sense resistor really should have four terminals shown in the schematic, forming four different circuit nodes: perhaps A is called SR_PLUS, B is called SR_PLUS_SENSE, C is called SR_MINUS_SENSE, and D is called SR_MINUS. This makes it really easy to designate in the schematic which components connect to which part of the sense resistor, because that information is captured by the circuit node. You might have a MOSFET with a source pin that connects to SR_PLUS (point A), and a current sense amplifier input that connects to SR_PLUS_SENSE (point B), and there’s no chance of screwing anything up and shorting the two nodes together anywhere except in the sense resistor itself. And here’s the problem with the nodal approach: you do eventually have to join the two Kelvin connections somewhere: SR_PLUS and SR_PLUS_SENSE both need to connect to one terminal of the sense resistor, and SR_MINUS and SR_MINUS_SENSE connect to the other. But the layout tool is designed to prevent inadvertent short circuits, and it knows that it is not allowed to connect two separate circuit nodes together. There is always some clearance distance between the traces of one circuit node and the traces of another. The only way they can interact is through the components. If you want SR_MINUS and SR_MINUS_SENSE to be separate nets in the layout, you can’t connect them with copper in the layout; you have to connect them using an external component, like a jumper. They need to have separate pads. So the sense resistor needs to have four separate pads. Otherwise it will cause errors in the design rule check.

The workaround for the nodal approach is tool-specific, and involves circumventing the usual design rule checks so you can overlap two pads, or connect two nets using a copper pour. I’m not familiar with the “right” way to do this in any of the computer-aided design tools. All I know is that it’s usually a hack. 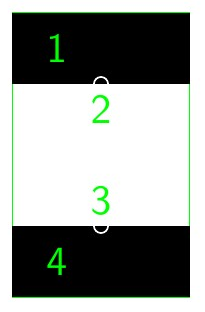 Count the pads: there are 4 of them. Terminals 1 and 4 are the main current-carrying terminals. Terminals 2 and 3 designate a small area along the inside of the current-carrying terminals to be used for Kelvin sensing. Except you just want the little circular gaps between terminals 1 and 2, and between terminals 3 and 4, to be “virtual”, so that the component has 4 virtual terminals but 2 physical pads. As far as I know, though, the PCB design programs don’t have this feature. (Maybe they do now. I don’t know. Drop me a line if you have this feature in your layout tools!)

In the meantime, be vigilant about your Kelvin connections.

Wonderful article, Jason. Thanks! Further improvement is presented in this article from analog devices "Optimize High-Current Sensing Accuracy by Improving Pad Layout of Low-Value Shunt Resistor": http://www.analog.com/library/analogDialogue/archives/46-06/shunt_resistors.pdf. It addresses the problem of voltage gradient in solder leading to Kelvin connection.