Have You Ever Seen an Ideal Op-Amp?

Somewhere, along with unicorns and the Loch Ness Monster, lies a small colony of ideal op-amps. Op-amp is short for operational amplifier, and we start our education on them by learning about these mythical beasts, which have the following properties:

And on top of it all, they will do whatever it takes to change their output in order to make their two inputs equal.

But they don't exist. Real op-amps have limitations.

And so one of the questions I ask on technical interviews is the following:

Suppose you have the following circuit. What's the output voltage? 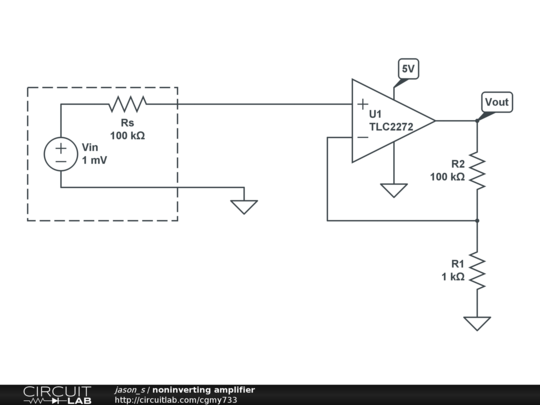 Presumably the interview candidate responds by working out the problem and calculating Vout = Vin * (1 + R2/R1) = 101mV. If not, then we go into triage mode and see if there's any reason we should not end the interview sooner rather than later.

The next question, is what are all the different reasons that Vout is not equal to 101 times Vin?

Let's look at the venerable uA741C datasheet. The 741, although not the first integrated circuit operation amplifier, was the first internally-compensated IC op-amp -- first introduced as the Fairchild uA741 in 1968, with lots of second-source versions -- and it deserves to keep its place on the shelf and out of your designs. Why? Because there are literally hundreds of better op-amps to choose from, many that are just as cheap as the 741. (Just for performance comparison, take a look at the TLC081C. It's somewhat more expensive, but not very much so, and we'll take a look at how it stacks up against the 741.)

In any case, here we go:

These are the main sources of DC error in the op-amp's linear range.

Other noise and error-related issues:

Finally, there are a few areas that deserve mention because they're not often specified or characterized by manufacturers: I'm sure I've missed at least one or two other subtleties about op-amps, but that's all I can remember at the moment. Two really good references for understanding op-amps (as well as many other aspects of circuit design) are The Art of Electronics by Horowitz and Hill, and Troubleshooting Analog Circuits, by the late Bob Pease.

Good luck with your circuit designs, and remember this rule about working with op-amps: no gain, no pain!