Steve Maslen●January 5, 2018●7 commentsTweet
This article will look at some DSP Sine-wave oscillators and will show how an FPGA with limited floating-point performance due to latency, can be persuaded to produce much higher sample-rate sine-waves of high quality.

Comparisons will be made between implementations on Intel Cyclone V and Cyclone 10 GX FPGAs. An Intel numerically controlled oscillator (NCO) IP block will also be considered.

Additional design notes will be published in due course, on the project website here and the latest developments can be followed on Twitter @precisiondsp. and  LinkedIn

As ever, it should be noted that any examples shown may not necessarily be the best or most complete solution.

Oscillator Aspects Considered in this Article

1. Context for the Oscillator requirements

One of the objectives for this project is to see what can be achieved with floating-point centric FPGAs. So, we will continue with that focus for signal arithmetic unless circumstances dictate a need for a fixed-point solution.

In terms of functionality, this project will require the generation of DC, Sine-wave, Square-wave, Noise and Arbitrary-wave signals. This article will concentrate on the Sine-wave ( + Bonus Square-wave) generation.

The Sine-wave Oscillators discussed here will be simple and/or easy to implement, but the project may well end up with more complex designs.

The ADI/LinearTech 16 bit DAC's have a maximum sample rate of 50Msps. The oscillator designs discussed here which drive those DACs will be be aimed for a sample-rate of 48Msps.

2. Some  DSP Oscillators for evaluation

For some general background reading on DSP oscillators. I have found the following useful.

...and now a look at some specific FPGA implementations

The Intel NCO component is one of the IP components provided with the Quartus Prime FPGA development suite and is documented here. It is a commercial package which offers a wide variety of implementation options whereby you can typically trade FPGA resource types and complexity against level of performance.  It is free to evaluate but requires a license for use in a distributable application.

The Intel NCO arrangement is shown in the following diagram.

Fig 1. Illustration of the NCO from the Quartus IP Document

and a description of the trade-offs for the various architecture options.

One nice feature of the Quartus IP configuration utility is that it provides a spectral plot of oscillator performance as you play with the configuration settings enabling comparisons to be made without actually needing to build or compile any designs. e.g. 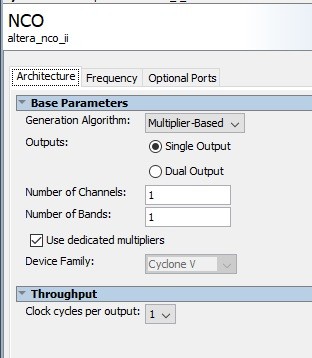 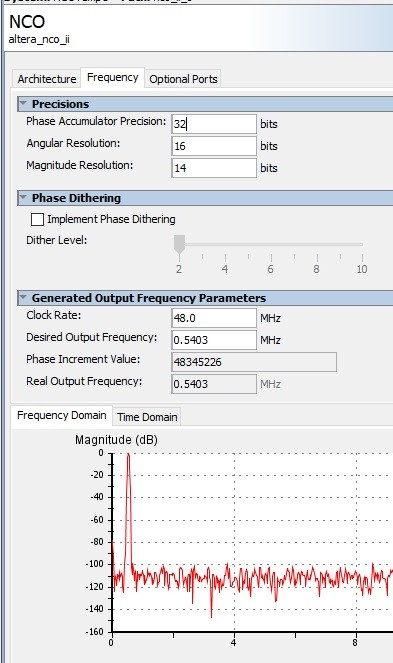 The FPGA resources needed for an unspecified Oscillator are illustrated as follows :-

Based on comparing resources and performance, the Multiplier-Based configuration was chosen for the Cyclone V FPGA. With 1 sample produced on each clock cycle and an fmax of 275 MHz, there is no problem in meeting our target of 48Msps if we use a 48MHz clock.

The Multiplier-based Oscillator produced the following spectral plot from the unit ADC measurements.

... and the physical o/p signal

Measurement made with a limited resolution oscilloscope and non-ideal probe earthing.

The simple Biquad recursive design is illustrated as :-

We can make one of these on a spreadsheet as shown next. Note that the Google spreadsheet precision is undoubtedly higher than the planned FPGA single precision format.

and here is a MATLAB single-precision version plot 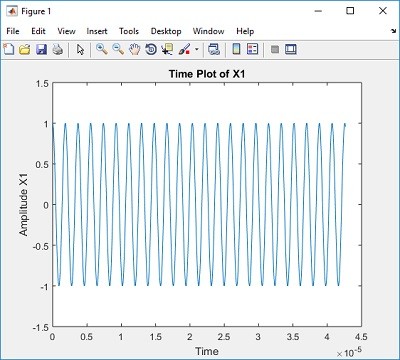 If we set the frequency determining value A = 0, we get a square wave.

Fig 10. Example square wave generated by a Biquad with A = 0.

The yellow trace is the signal as it appears on the unit SMA port connector.

Risetime in part due to scope and scope probe.

The arrangement of Fig 7. was implemented for the Cyclone V using the Quartus ALTERA_FP_FUNCTIONS which are documented here.

The Cyclone V floating-point blocks can be tuned for a balance between operating frequency and cycle latency but the actual time latency is a minimum at around 50MHz and 2 Cycles for both multiply and subtract blocks. This latency is important because we can't get the next value in the oscillator sequence until the multiply and subtract are done. For a variety of reasons, the Biquad oscillator was run at 48MHz with 6 Cycles between generated samples i.e. an oscillator sample rate of 8Msps which falls well short of our 48Msps requirement.

The resulting highly quantized 540.3KHz waveform is shown immediately below 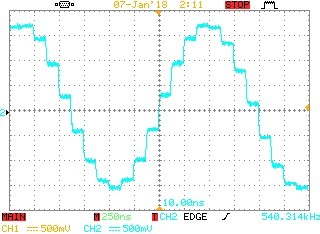 The Cyclone V cannot meet the 48Msps requirement with a simple recursive oscillator. Options are :-

Plan A - Run multiple oscillators at different phases and combine them.

Problem - Even when set to the same frequency, multiple recursive oscillators can exhibit small actual frequency differences when they are each set to a different initial condition. This was not analyzed but is most likely due to arithmetic quantization.

Plan B - Run a modified recursive oscillator at 48Msps in an arrangement like this ..

Fig 12. Plan B. Accounting for the calculation latency

Here, we must modify the calculation for X2 so that the correct values appear when they become available after the unavoidable calculation delay. In the interim, pre-calculated values must be fed into X2 until the "live" calculations start appearing.

Problem - A spreadsheet was constructed and worked well for quite a few sample values until errors started to grow and the oscillator became unusable. Most likely the arrangement is ill-conditioned and will only work with perfect precision.

Plan C - Run a recursive oscillator at 8Msps and calculate fill-in values from the slow oscillator values to construct a 48Msps waveform in an arrangement like this ... 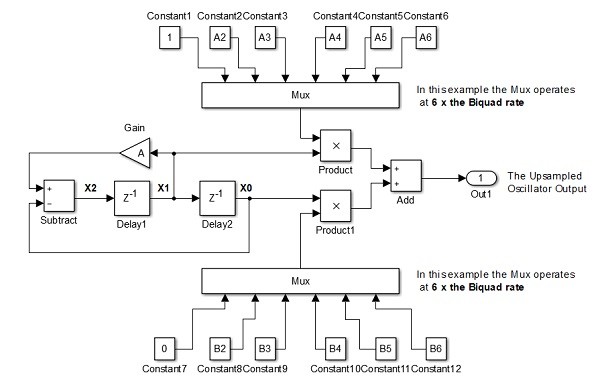 We thus have a slow Biquad providing samples at 8Msps. and for example a 6 position Mux  running at 6 * 8 = 48Msps which produces the 6 waveform values needed until the next Biquad values are available.

The detail is beyond this blog, but the spreadsheet version looks like this.. 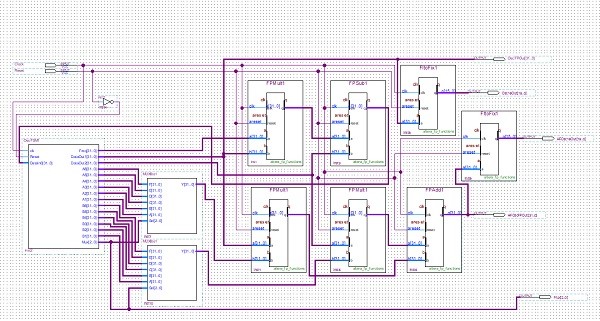 Again, this is not intended to show detail and in any case it is not optimized, but in rough terms it consists of :-

The results from this are ...

... and the physical o/p signal

Measurement made with a limited resolution oscilloscope and non-ideal probe earthing.

For our final oscillator we will go back to the simple Biquad recursive scheme, but this time it will be implemented on the Cyclone 10 GX FPGA which is the latest Cyclone offering from Intel.

This exercise is limited to compilations and simulations as I don't yet have a physical Cyclone 10 GX dev. kit to attach to the unit mixed-signal circuits.

This time it's a really simple FPGA implementation ... 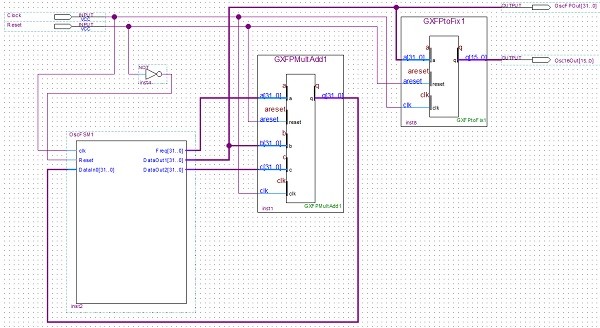 The Cyclone 10 GX IP library includes a Multiply then Add block. This together with a floating-point conversion and some simple register control logic make the complete oscillator.

Notes for the Cyclone 10 GX  recursive oscillator are :-

The simulated results are :-

Intel NCO IP - For some projects, the Intel NCO type oscillator is a no-brainer as it is flexible, scalable, efficient, guaranteed stable, performs well and is supported across the Intel FPGA range. For some companies the cost of the IP can be justified by the ease of design and implementation that a commercial package offers. Of course, if a competent lower-cost alternative were available that offered similar features, then that would be even more attractive.

As far as I can tell, the Intel NCO IP is a fixed amplitude oscillator which can be set at the desired No of Bits. so, if variable amplitude were needed on the digital signal, then that would require additional blocks.

Recursive oscillators are not guaranteed to be amplitude stable, due to imperfect arithmetic precision but for my present applications and using single-precision arithmetic, an observed stability of within +-0.002% Vrms readings over 1 hour is more than good enough (Although that was only at one frequency and one set of initial conditions).

The amplitude and phase of the recursive Biquad can be controlled by setting the initial state values.

But, the Cyclone V cannot run a simple floating-point Biquad quickly enough to attain a 48Msps sample rate although that could be seen as an unnecessary challenge in creating a sine-wave oscillator. 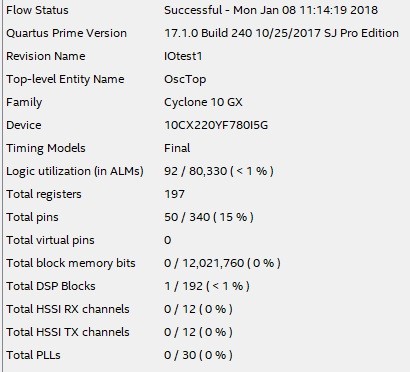 For this project, right now, on the Cyclone V FPGA, the augmented Biquad recursive oscillator offers the required performance and the FPGA resources needed for it are fine at the moment. There has been a cost in time and effort to develop the design process and implement a working FPGA block, but the gain in knowledge was worth it. The cost of the commercial NCO IP cannot be justified at this stage.

It could be that a lower-cost non-recursive NCO could be found or designed and that remains an option for the future.

The Cyclone 10 GX theoretical design and simulation indicate that great strides are being made in the "number-crunching" capability being offered at the "economy" end of  FPGA offerings.

Thank you for your interest, Steve    Twitter @precisiondsp. and  LinkedIn

Next up will be - Open and Closed-Loop Test Methods
Comments

Hi Steve. Wow. Your comprehensive blog is rich in technical details! I have no experience with FPGAs so I hope you'll tolerate my "dumb" questions:

[1] I was startled by the graphical notation for the biquad in your Figure 7. It looks like a rectangle containing the letter 'A' means "multiply by A", and the circular multiply symbol actually means "addition." Is that graphical notation standard (traditional) in the discipline of FPGAs?

[3] In your Figure 13, does a rectangle containing the letter 'X' mean "linear interpolation"?

Hi Rick, Thank you for the comments. I'm sure none of your points are "dumb". I'll get to your points a bit later and I suspect that I might need to sharpen up the notations a bit when I work out which hat I've got on and whether I should use i or j.

[1] I was startled by the graphical notation for the biquad in your Figure 7. It looks like a rectangle containing the letter 'A' means "multiply by A", and the circular multiply symbol actually means "addition." Is that graphical notation standard (traditional) in the discipline of FPGAs?

Ha, That is because I learned Feedback Control Systems in the 70's, but still in use by the American Society of Mechanical Engineers in 2015 as below.

As you say, in this context the box is multiply, times, x, X, *,, or . depending on how I feel and the circle with an X is a traditional(old) symbol for summation, with a negative sign on the signal if it's to be subtracted.

Here is my spreadsheet Biquad with A=0 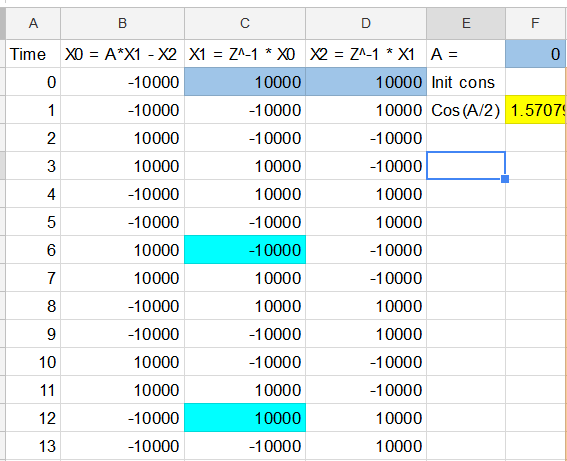 [3] In your Figure 13, does a rectangle containing the letter 'X' mean "linear interpolation"?

Thanks for those points, I'll tighten up the consistency and add some definitions in a while.

Hi Steve.  Ah, now I see. Our differing outputs for A=0 are caused by your and my different initial conditions.  Based on your initial conditions, A=0 does indeed produce a squarewave-like output. All is well.

Regarding the following graphical symbol

meaning "addition" (or "subtraction"), that astounds me.  I wonder how that convention got started.  Doesn't that convention cause problems when electrical and mechanical engineers look at each other's drawings (schematics)?

Hi Rick, Yes, I originally started with one set of labeling and changed it for the Blog because it felt better. Then I skipped back to the old sheet with the old labeling for the reply.

Description from one of my undergraduate textbooks

"The purpose of this work is to provide a course of study in elementary control theory which is self-contained and suitable for students of all branches of engineering and of applied physics." 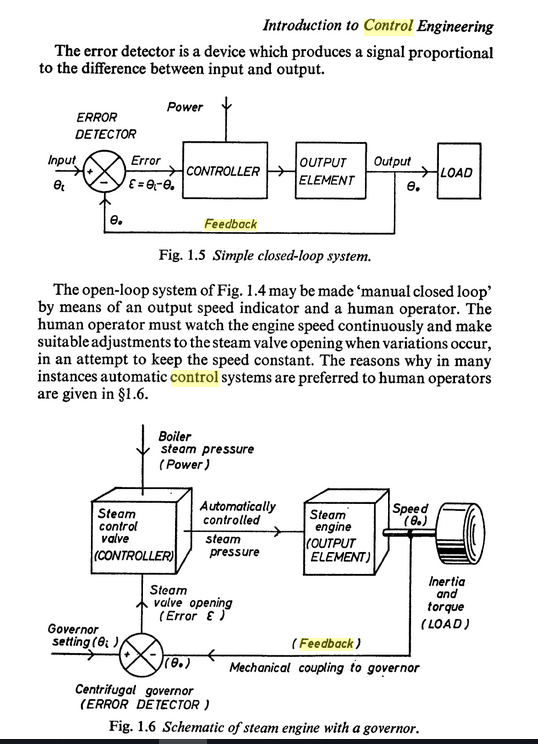 Rick, I think maybe I'll redo some of the diagrams in Simulink where the symbols are more widely known and the lables are self-explaining. e.g. 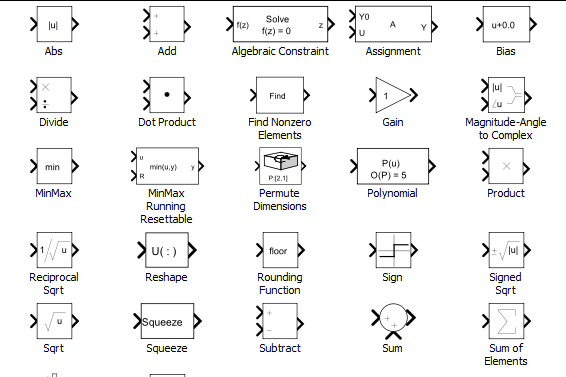