This part in the series will consider the signals, measurements, analyses and configurations for testing high-speed low-latency feedback loops and their controllers. Along with basic test signals, a versatile IFFT signal generation scheme will be discussed and implemented. A simple controller under test will be constructed to demonstrate the analysis principles in preparation for the design and evaluation of specific controllers and closed-loop applications.

Additional design notes will be published in due course, on the project website here and the latest developments can be followed on Twitter @precisiondsp. and  LinkedIn


As ever, it should be noted that any examples shown may not necessarily be the best or most complete solution.

***For some reason, the indented lists which are fine in the editor are not fine when published.***

Test-bed Aspects Considered in this Article

This project is concerned with the development of high-speed low-latency controllers and an example closed-loop application that can make arbitrary (within reason) 1 and 2 port electrical/electronic circuits.

An evaluation unit has been designed and manufactured to evaluate what levels of functionality and performance can be achieved using modestly-priced and readily available technology with a particular emphasis on floating-point FPGA devices such as the Cyclone V and the emerging Cyclone 10 GX parts from Intel.

Given that the unit's 2-channel controllers/closed-loop circuits naturally incorporate ADC and DAC devices, it made sense to design in a small amount of additional flexibility to provide a Signals and Measurement Test-bed for the evaluation of the Controllers and Closed-loop applications.

As part of the general and test-bed development, the ADC, DAC and Signal Generation sampling rates have been increased and unified since the previous articles.

2. Summary of some key ADC/DAC specifications

ADC Sample Rate - The 16 bit ADC sample rate has been increased from it's previous value of 4 Msps to a new value of 8 Msps (Nyquist = 4MHz). The maximum possible rate for the LinearTech/ADI LTC2387-16 device is 15 Msps. There is an option to fit an 18 bit pin compatible device.

DAC Sample Rate -  The 16 bit DAC sample rate is 24 Msps. The maximum possible rate for the LinearTech/ADI LTC1668 device is 50 Msps. The 24 Msps figure is a limitation due to the 2 main DACs and the 2 optional auxiliary DACs sharing a multiplexed data bus. Operation to 48 Msps is envisaged if the auxiliary DACs are not used or if only one channel is active.

DC signals are typically used for steady-state evaluation of controllers and closed-loop systems. High accuracy DC levels can be applied and measured by the Test-bed.

b. Single sine-waves, with and without "Turbo" sampling mode

Sine-wave testing is a standard method for evaluating the Magnitude and Phase performance of controllers and closed-loop applications. Some applications are envisaged that will make use of an alternative result presentation, using the Real and Imaginary components of the measured signals rather than Magnitude and Phase.

Single frequency sine-waves are provided by a floating-point "Biquad Oscillator which operates at 8Msps. This maximum Biquad speed is limited by FPGA latency. A "Turbo" arrangement described in the previous Blog extends the sampling rate to 24Msps. The Cyclone 10 GX future option offers a much lower floating point latency which will not require the "Turbo" mode in this application, but may well do in other higher frequency applications. 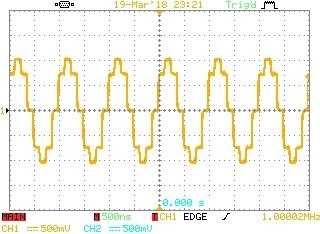 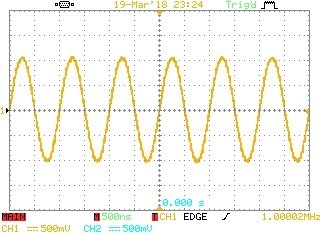 An arbitrary signal generator has been implemented that is currently set for a 32k samples record, 24Msps sample rate and a 16 bit resolution. The record can be continuously repeated. Some of the initial wave-forms are :-

i. Ramp - The Ramp waveform is another well-known signal used for evaluation how well feedback control systems can follow a simple moving demand signal. The following is an example Ramp generated by the arbitrary signal generator. 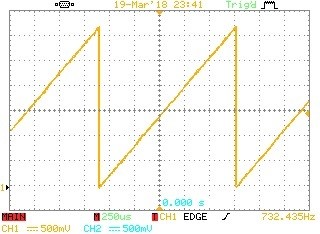 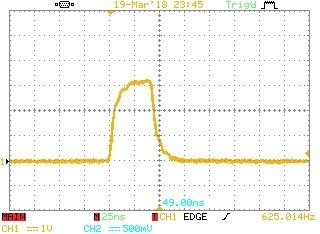 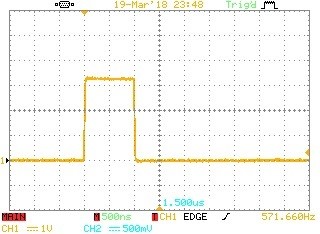 Fig 7.  This is another example pulse, this time it has a duration of 1us. 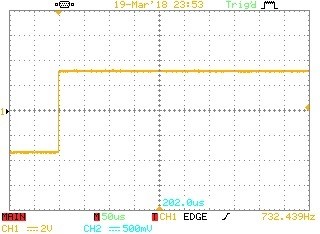 There are a variety graphing methods for assessing control loop characteristics. Principle among these are the Bode, Nyquist & Nichols Charts. They present in various ways the transfer function or output/input characteristic of the block being designed/evaluated. In each case the output/input relationship is determined at a number of frequencies and then plotted over the frequency range of interest. In some cases the output/input is expressed as Magnitude and Phase and in other cases Real and Imaginary components.

For the sake of efficiency, it would be nice to test at more than one frequency at a time.

So, having spent a fair amount of time creating a single sine-wave generator, we are now going to look a block that can produce 16,384 sine-waves + an optional dc level, at the same time.

There are plenty of resources on this site and elsewhere that discuss FFTs, etc. but here are just a few points to note, especially in the use of IFFTs.

In the examples that follow, I will use the MATLAB IFFT for general examples and the Math.NET Numerics

For a 1st set of MATLAB exercises, we will look at using the IFFT to Generate various signals from an array of 16 frequency domain values. We will start with using a single Real array. The Array allocations for the IFFT input are :-

Where dc is the dc component, F1 to F7 are 7 frequencies in ascending order and FNyq is the Nyquist frequency = Sampling Rate/2.

Here are some example IFFT output sequences for a variety of frequency array settings. In the present context, these will be the time wave-forms generated by the arbitrary signal generator. 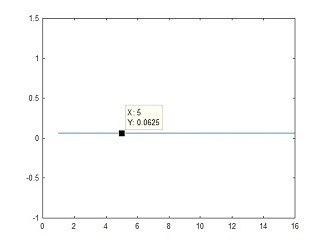 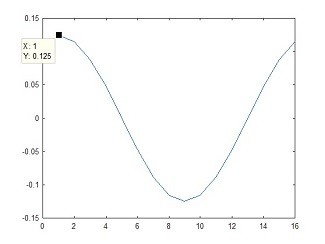 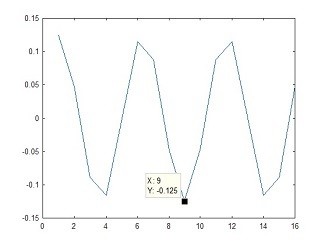 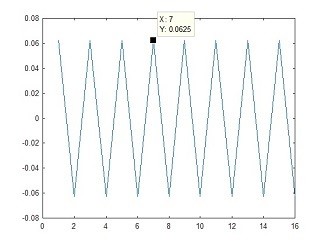 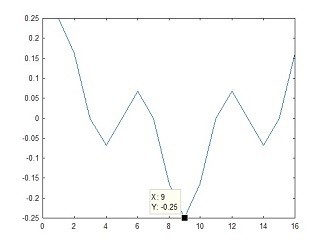 Generating a flat spectrum, Plan A and Plan B

Now we can look at generating a broad spectrum of sine-waves for use in Bode Plotting etc. 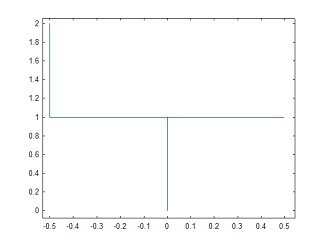 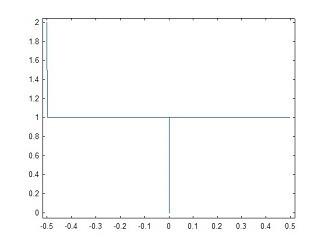 Apologies for the switch in bin ordering for the FFT display, which is now :-   FNyq shown at the left hand edge, then -ve frequencies, then the dc level and finally the +ve frequencies. For simple plotting it's either this or showing the -ve frequencies in the range 0.5 -> 1.0 which is even stranger.

OK, remembering to add the +ve and -ve magnitudes together, we have an effective magnitude from > dc to FNyquist = 2.0 across the whole band.

Now to the time domain signals that produced these identical frequency responses. 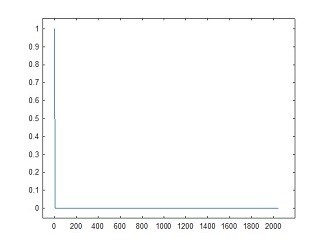 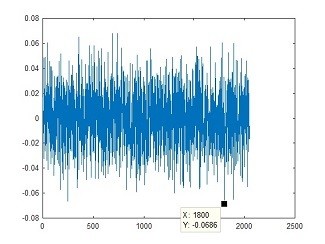 The key message from this is that if you want to get a flat spectrum of test frequencies, you can either provide the "Random" noise signal generated by the IFFT in Plan B or you can apply an impulse with a magnitude some 1/0.0686 = 14.6 times higher as shown in Plan A.

Each of the two Channels in the evaluation unit can be configured in a variety of ways. These include :- 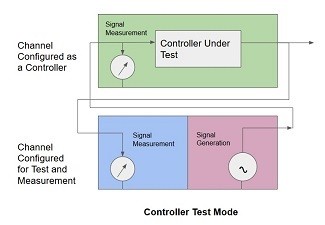 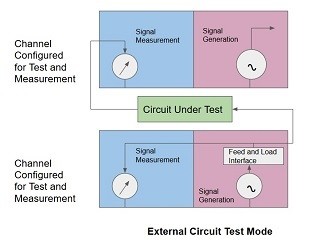 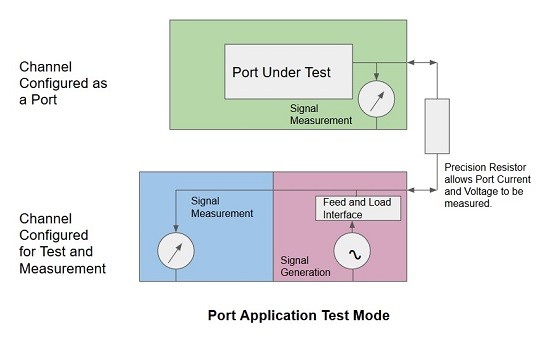 Fig 20. One of the possibilities for measuring I/O Port Characteristics

Fig 21. The Green Channel 1 Plot shows an IFFT / Arbitrary Signal Generator waveform where all of the frequency bins are active except for dc and Nyquist. The Orange plot is the Channel 2 noise floor.

Fig 22.This plot shows the detail of the spectral signal. There is around a 1 dB drop from dc to Nyquist due to the ADC filtering. In any case many of the tests will be ratio based so the exact flatness is not important. For other tests a simple 1st order digital filter will provide correction.

Fig 24. In this case a single frequency bin at 2.5MHz has been turned off to demonstrate a "missing bin" test. This type of test is used to prove that no undue distortion from hardware or mathematical sources is present, that would result in inter-bin corruption.The missing bin is clean down to -111 dB.

Fig 25. Finally an image showing that only part of the spectrum can be selected and that bins can be skipped. This case might be used to allow a smaller number of stronger signals to be used to probe specific portions of the frequency band.

Now that we have methods for multiple sine-wave generation, signal capture and configurations for 2-port testing, we can look at setting up and analyzing signals for Bode Plots and the like. In addition to the standard Magnitude and Phase measurements a simple extension to provide a Latency calculation will also be added. In this context the Latency between the input and output signals is defined as :-

Results for an uncalibrated divider network

A test circuit was constructed to provide an initial check on the methods and analysis.

Fig 26. A Test Circuit made with 1% resistors and unknown capacitance.

Fig 27. This is the test waveform applied to the test network of Fig 26.

Fig 28. These are the frequency domain magnitude measurements of the test network input signal (Green trace) and the corresponding output signal (Orange trace).

Fig 29. This plot shows the output/input frequency response of the network under test.
The loss at 1MHz is -6.38 dB

Fig 30. This plot is the phase lag produced by the network under test.

Fig 31. This latency plot is derived from the phase plot above and the frequency corresponding to each phase point. The Latency at 1MHz is 38.6ns.

Oscilloscope measurements were made to provide a rough confirmation of the above results at 1MHz. 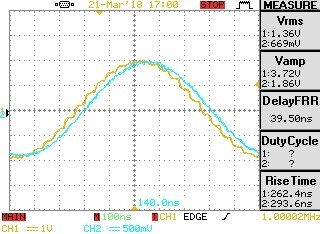 Scope plots of a 1MHz signal from the floating-point signal generator to the test network input (yellow trace) and the output signal resulting (blue trace).

Note -The Scope Vrms and Delay reporting are rather noisy and could benefit from an averaging exercise.

Further due diligence is required, but the 1st impressions are most promising.

The developments for this stage of the project included the FPGA activities of upgrading the ADC and DAC sample rates, ensuring close synchronization for all generated and measured signals, incorporating the "Turbo" sine-wave scheme previously described, developing the arbitrary signal generator and upgrading the FPGA/PC command and control interface.

The PC user interface required C# updates to manage the new signal generator controls, generate the IFFT signals, pass the arbitrary wave-forms to the FPGA, provide FFT and associated analysis and present the results to screen.

On the science side the extensions were to bring IFFT and FFT techniques used on previous projects into the current project.

Out of all that activity, the toughest part was working at nano-second and sub nano-second timing in the management by the FPGA of the ADC and the DAC Multiplex system. Although the ADC and DAC sample rates are modest, the clocks and timings associated with them are running at several hundred MHz.

The next phase of the project will see the FPGA implementation of Controller Transfer Functions for the 1st time on the evaluation unit.

The IFFT and associated FFT analysis along with the hardware, firmware and software that run them have added a powerful diagnostic and self-diagnostic capability to the evaluation unit. The expectation is that the performance of controllers along with associated open-loop and closed loop applications can now be developed and tested with accurate measurements for signal levels, phase and latency.

Thank you for your interest, Steve    Twitter @precisiondsp. and  LinkedIn

Next up will be - Some initial results for controllers and closed-loop application.